Two of Africa’s big guns clash, both hoping to prepare for big matches to come.

In the summer of 2019, Algeria won the Africa Cup of Nations for the second time, beating Nigeria in the semi-finals before ousting Senegal in the final.

That was the first time they’d won AFCON for 30 years.

Thus, a major priority for the Dessert Foxes is to make sure they’re at Qatar 2022.

Nigeria meanwhile claimed bronze at AFCON 2019, they won champions of the last AFCON they’d qualified for before then in 2013.

The Super Eagles have qualified for six of the last seven World Cups, only missing Germany ’06, so will be one of the favourites to represent Africa in two years time.

These two will next be in competitive action when 2021 Africa Cup of Nations qualification returns next month.

2022 FIFA World Cup qualification commences for both in May 2021.

Who will come out on top at Jacques Lemans Arena in Austria?

How to watch a Nigeria vs Algeria live stream

In order to watch a Nigeria vs Algeria live stream you must have a funded Bet365 account or to have placed a bet in the last 24 hours.

Nigeria vs Algeria live stream is available everywhere to watch, subject to geo-restrictions.

Nigeria vs Algeria is available to watch on Bet365 in the United Kingdom and Ireland.

NOTE: Please be aware that you will need an active Bet365 account to watch Nigeria vs Algeria.

Nigeria and Algeria will take to field for the first time in almost a year on Friday night as the pair prepare to lock horns for an international friendly at Jacques Lemans Arena in Austria.

The contest will act as valuable preparation for both sides as they build towards resuming their qualification campaigns for the 2021 Africa Cup of Nations next month.

Nigeria have not been in action since a 4-2 win over Lesotho last November, which made it back-to-back victories at the start of their Africa Cup of Nations qualification group.

Gernot Rohr‘s side are currently top of Group L, opening their section with a 2-1 success over Benin before overcoming Lesotho last time out, with Victor Osimhen, Alex Iwobi and Samuel Chukwueze on the scoresheet.

Nigeria will play another friendly against Tunisia on October 13 before resuming their AFCON qualification campaign at home to Sierra Leone on November 8 ahead of the reverse match eight days later.

The Super Eagles will be without the services of Napoli attacker Osimhen for Friday’s contest, but a strong squad still includes the likes of Chukwueze, Iwobi and Kenneth Omeruo.

Rohr’s team lead the head-to-head record over Algeria nine wins to eight, but they have lost their last two encounters with the reigning African champions.

Algeria, as mentioned, triumphed in the 2019 Africa Cup of Nations, beating Nigeria 2-1 in the semi-finals before recording a 1-0 victory over Senegal in the final of the competition.

Like Nigeria, Djamel Belmadi‘s side have not been in action since last November due to the coronavirus pandemic, most recently beating Botswana to make it two wins from their two qualification games for the upcoming Africa Cup of Nations, leaving them top of Group H.

The Greens will face Mexico in another friendly on October 13 before resuming their AFCON qualification campaign at home to Zimbabwe on November 8 ahead of the return match eight days later.

There will be a number of familiar faces on display for Algeria in this match, meanwhile, with Manchester City’s Riyad Mahrez, AC Milan’s Ismael Bennacer and Brentford’s Said Benrahma all in the squad.

Interestingly, there are only two caps between the four goalkeepers named in the Nigeria squad, but Maduka Okoye should earn his second cap for the national team in this match.

Ola Aina, who is currently on loan at Fulham, is also expected to be handed a spot in the XI, while Everton’s Iwobi and Nantes attacker Moses Simon are also likely to be in the starting side.

As mentioned, Osimhen is not in the squad, meaning that Paul Onuachu could join Chukwueze in an attacking spot, although Ahmed Musa is also an option through the middle.

As for Algeria, Bennacer, Mahrez and Benrahma should all be in the starting side, while Montpellier’s Andy Delort is also expected to be handed a spot in the final third of the field.

Sofiane Feghouli and Adlene Guedioura should both feature in the middle of the park, while Real Betis’s Aissa Mandi will be a part of a back four that is also likely to include Borussia Monchengladbach’s Ramy Bensebaini.

Baghdad Bounedjah is the joint-leading goalscorer in the Algeria squad alongside Mahrez with 15 goals, but the 28-year-old is expected to start the international friendly on the bench. 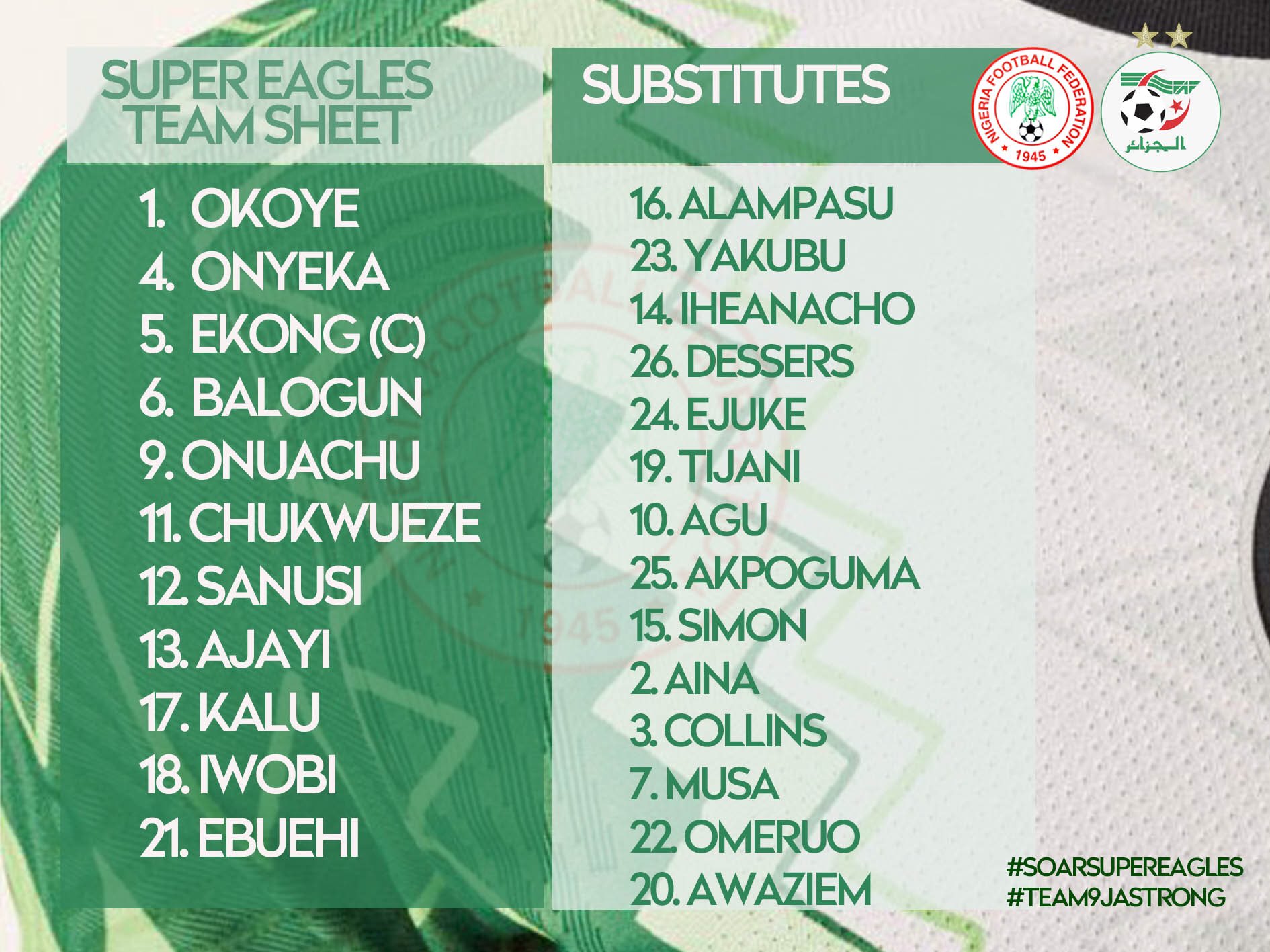