Manchester United welcome Arsenal to Old Trafford in the Premier League this weekend on a high after Wednesday’s 5-0 thrashing of RB Leipzig in the Champions League.

Marcus Rashford’s hat-trick from the bench has provided a much-needed boost to United, who had previously struggled to produce the goods at home.

The hosts come into this fixture 15th in the Premier League, having taken just seven points from their opening five games.

Meanwhile, league goals have been hard to come by for Arsenal, who have failed to find the net in consecutive 1-0 defeats by Leicester City and Manchester City last time out in the league.

All odds and offers within this article are accurate at the time of publication (14:30, 31/10/2020). You can find out more about William Hill’s football markets here. 18+ only. BeGambleAware.

Can United end their home league hoodoo, or will the Gunners finally start firing?

Suddenly United have hot competition for places. They have turned things around since the embarrassing 6-1 defeat by Tottenham, picking up three victories and a draw, including back-to-back clean sheets.

Centre-back pairing Harry Maguire and Victor Lindelof kept Leipzig’s front line quiet on Wednesday and will be hoping to continue to rebuild their confidence on Sunday.

While the back five of Maguire, Lindelof, David De Gea, Aaron Wan-Bissaka and Luke Shaw is likely to remain unchanged, there are decisions to be made elsewhere.

Scott McTominay will hope to retake his position alongside Fred in midfield after seeing Nemanja Matic start midweek, while Paul Pogba could keep a starting berth following his positive performance against Leipzig.

Bruno Fernandes should return to replace Donny van de Beek, who started against the Germans, while Anthony Martial’s domestic suspension after the red card against Spurs opens the way for Mason Greenwood up front.

Greenwood opened the scoring with a precise finish on Wednesday and, if given the opportunity, will be looking to open his account in the Premier League this season. 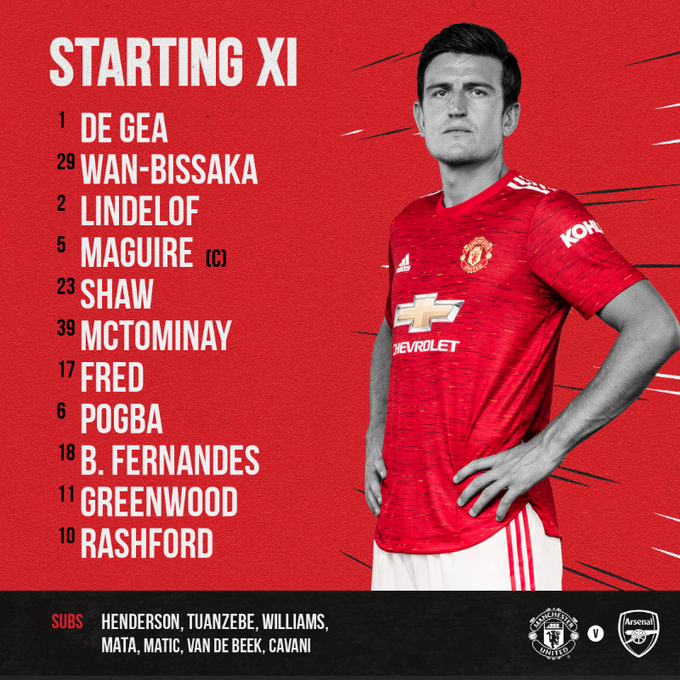 Mikel Arteta is short of options in defence. David Luiz was described as “a big doubt” by Arteta in his press conference ahead of the Gunners’ Europa League game against Dundalk on Thursday and Rob Holding, Calum Chambers and Pablo Mari are all struggling with injuries.

If Luiz isn’t ready for the weekend, which seems highly likely, then last-man-standing Shkodran Mustafi is a possibility to start alongside Gabriel and Kieran Tierney in central defence. Granit Xhaka, who played in the back-three against Dundalk and Leicester, might be fielded in Mustafi’s position in the lineup graphic below or else replace Tierney, should the Scottish full-back be deployed at left-wing back. 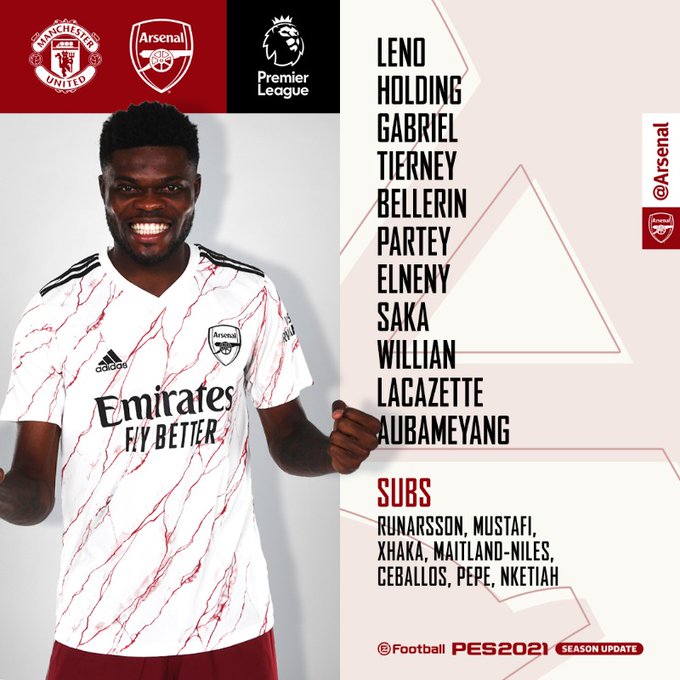 Using Willian as a false nine was unsuccessful against Man City, and so Arteta ditched the idea for their 1-0 defeat by Leicester last time out.

With Mesut Ozil well and truly gone from the picture, the question is how Arteta chooses to deploy Pierre-Emerick Aubameyang, Alexandre Lacazette, Willian and Nicolas Pepe.

Could it be time to try Aubameyang through the middle? “Yes, that’s a very possible thing,” Arteta told reporters on Wednesday before the 3-0 Europa League win over Dundalk.

“It will depend on the games. I think it’s very important to see who is around him and why we’re doing it. Not just the fact we’re doing it, why we’re doing that and what we’re going to get by doing these positive things. Of course, there’s a very strong possibility to play him as a No.9.”

3. Rashford to ride the wave

Rashford is on top of the world at the moment and scored a first-ever club hat-trick against Leipzig on Wednesday.

His impact, three goals in 16 minutes after coming off the bench in the 63rd minute, blew the German side away and gave United a perfect start in Group H.

With Martial suspended in the Premier League until the game against Everton on 7 November, the burden of goalscoring rests on Rashford’s shoulders. He has already shown he is capable of carrying it.

Surprisingly, though, since scoring twice against Arsenal on his Premier League debut in February 2016, he hasn’t netted in any of his last nine games against the Gunners in all competitions.

Arsenal have misfired at the top of the pitch recently. Arteta has improved other areas, but the Spanish manager needs to find a solution in attack.

The Gunners are averaging just 1.3 goals and 8.8 shots per Premier League game so far this season. According to Opta, that’s their lowest goals-per-game record since 1995-96 and their lowest shots-per-game average campaign since 1997-98.

Aubameyang has gone five league matches without a goal for the first time since November 2014 (when he was at Dortmund), while Lacazette has blanked in the league since netting in each of Arsenal’s first three matches.

Something has to give, but will the floodgates open this weekend?

5. United to get their first home league win

United have endured a poor start in the Premier League at Old Trafford. Crystal Palace won 3-1, Spurs hammered home six in a 6-1 victory and Chelsea secured a point in a 0-0 stalemate.

Since losing 1-0 to the Gunners in September 2006, they are unbeaten at home in the Premier League against the weekend’s opponents, so losing would buck a 14-year trend.

And with a 5-0 win over last season’s Champions League semi-finalists fresh in the mind, and with confidence up and competition for places fierce, now appears to be the time for 20-time English champions to get a first home league win of the season.