The final day of the Premier League season brings a Champions League showdown as Leicester City host Manchester United on Sunday at 4:00pm.

Manchester United have the upper hand, sitting in third after their 1-1 draw with West Ham, coupled with defeats for Leicester and Chelsea in their most recent games. It means that, with a better goal difference over Chelsea and two points clear of Leicester, United only need a draw to confirm their spot in the top four — while a win would secure third, their best finish since 2017/18.

For Leicester things are almost as simple. A win against United would see them leapfrog the Red Devils and confirm Champions League football regardless of Chelsea’s result. However, a draw would also be enough for Leicester if Chelsea are beaten by Wolverhampton Wanderers, owing to their better goal difference.

But history does not shine on Leicester, who have lost eight Premier League home games against Manchester United, winning just once and drawing four times.

Where to watch Leicester vs Man Utd on TV:

Where to live stream the game:

US: Fubo* are streaming this match live for account holders. Those without a Fubo account already who are interested in streaming Leicester vs Man Utd live can take advantage of their seven-day free trial by following the simple steps below. 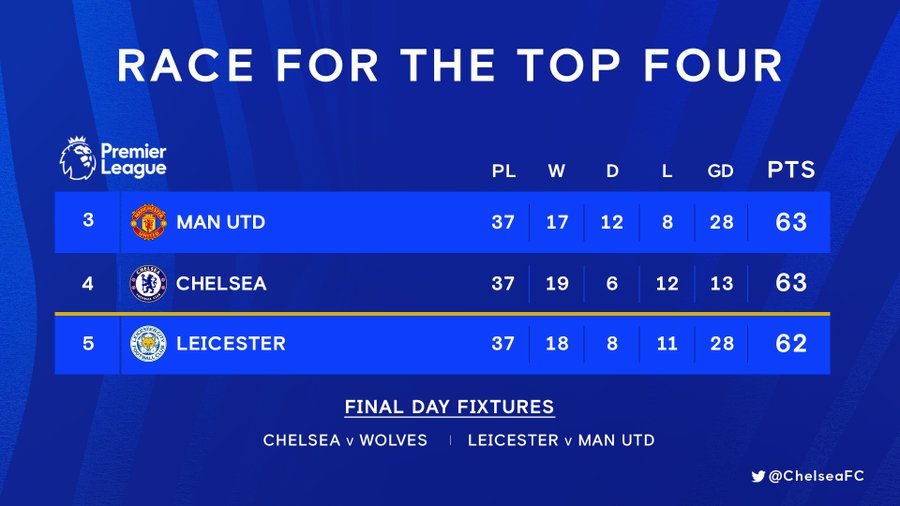 Neither side has any fresh absentees following their previous outings but remain without a number of stars, including James Maddison and Ben Chilwell for Leicester.

Manchester United have a lot of star forwards but on Sunday, Leicester’s Jamie Vardy will be looking to become the ninth different Englishman to win the Premier League Golden Boot – and just the second since 2000.

The 33-year-old currently leads the way in the Premier League goalscoring charts, scoring 23 goals in 34 appearances so far, two more than his closest challenger Danny Ings.

Vardy had looked in control of the Golden Boot race for quite some time, reaching 17 goals after 18 games, opening up a comfortable lead on those around him. But then the Englishman endured a drought. His next seven appearances brought zero goals, coinciding with a poor run of form for Leicester which also saw them lose grip on third. Two more goals just before the Premier League took a break opened up the breathing room once more and Vardy has been clear ever since.

In his past eight games since the Premier League returned, Vardy has scored four goals, including a brace against Crystal Palace and one each against Arsenal and Bournemouth. During that run Vardy reached 100 Premier League goals, becoming the 29th player to do so but it’s something the Englishman admits he may not appreciate until his career is over.

“It’s a massive achievement but it’s one of those, ‘yes you’ve done it’, but it’s all about the next game then, so you don’t really get time to have it sink in,” Vardy told Leicester’s official website.

“It’s probably something that, when I finish football, I can look back on it and actually realise what it means.

“The season finishes and you get away to forget about football for a few weeks and then you’re straight back in to start the next season. So it’s all about constantly going and going.”

For Vardy, the next game is the most important one, for both himself and Leicester. With a Champions League spot on the line, Vardy can also join Harry Kane as the only Englishmen to win the Premier League Golden Boot this century while equaling his best ever tally of 24 in the top flight.