Chelsea’s quest for Champions League football goes down to the final day when they host Wolverhampton Wanderers on Sunday at 4:00pm.

The Blues are currently fourth and need just one point to secure their spot with third-placed Manchester United and fifth-placed Leicester City facing each other at the same time. Chelsea had the opportunity to secure their top four spot on Wednesday when they traveled to Anfield to face champions Liverpool but were on the wrong side of a 5-3 thriller.

But their opponents Wolves also have European qualification on the line. Nuno Espirito Santo’s men are in sixth and, as things stand, are set for the Europa League qualifying rounds but it is not secure yet. Tottenham Hotspur are just one point behind Wolves and will be hoping for a slip up to capitalise. Seventh may still be enough for Wolves, but they’d then be depending on Chelsea winning the FA Cup final.

So, two teams with everything to play for, but who will come out on top?

Where to watch Chelsea vs Wolves on TV:

Where to live stream the game:

US: Fubo* are streaming this match live for account holders. Those without a Fubo account already who are interested in streaming Chelsea vs Wolves live can take advantage of their seven-day free trial by following the simple steps below. 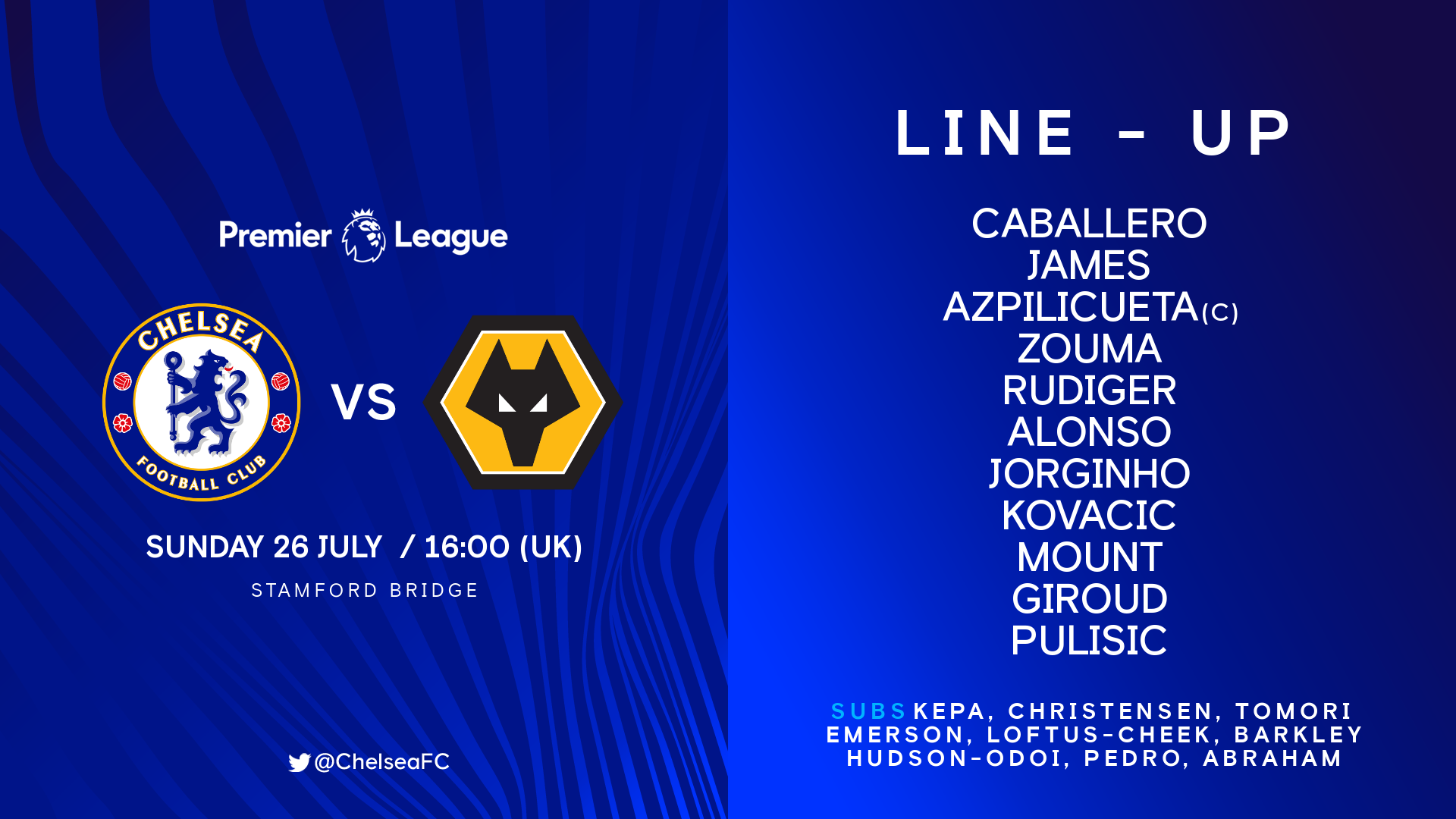 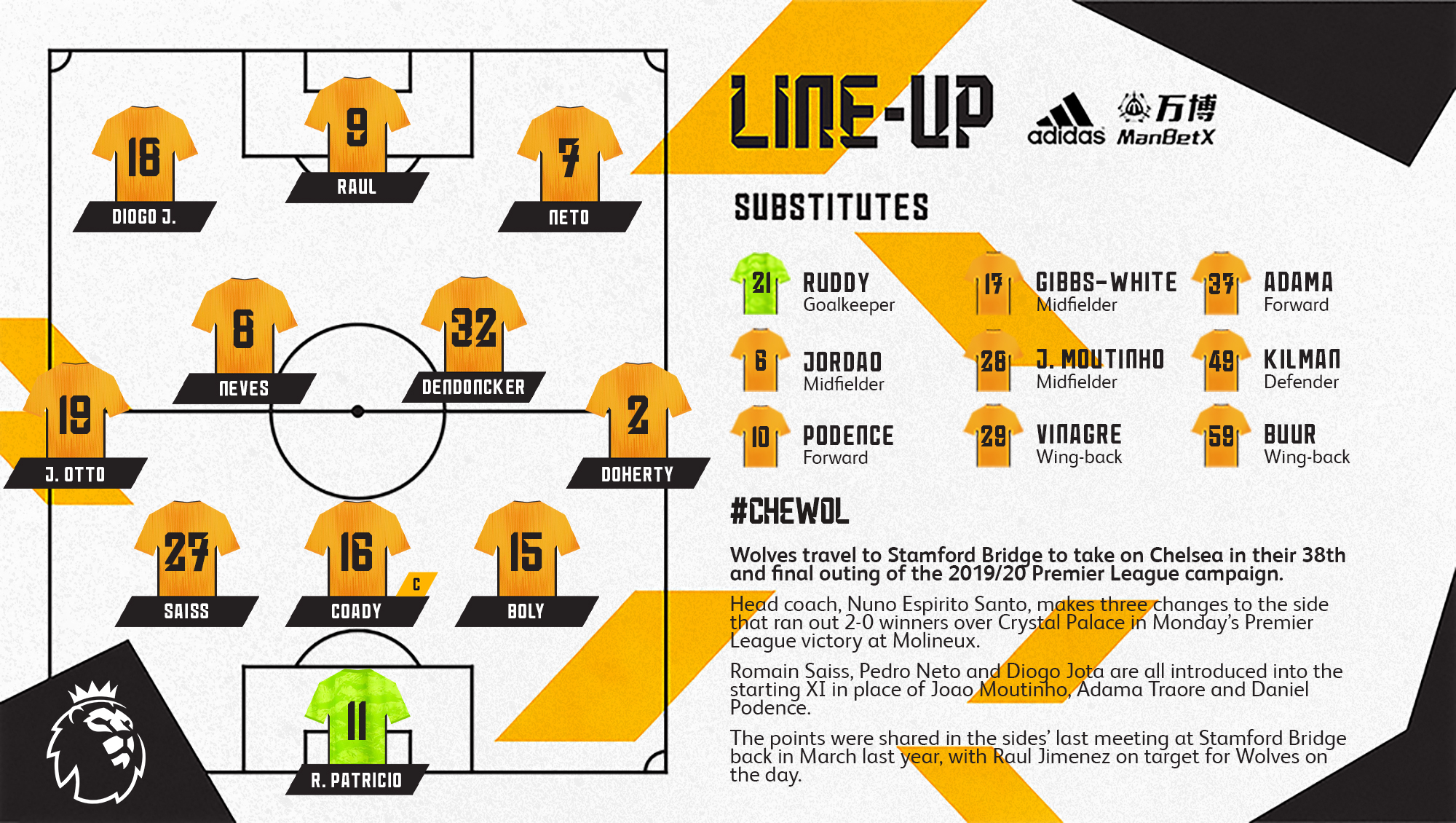 Neither side has any fresh absentees with Chelsea still missing N’Golo Kante and Billy Gilmour. But Frank Lampard may be tempted to switch up his team, bringing in Christian Pulisic after his substitute appearance against Liverpool.

Chelsea may have lost to Liverpool, with their defence ultimately being their downfall, but there were still a few positives for the Blues to take. One of those was the performance of Christian Pulisic.

The American has endured a tough first season in English football with his early signs of quality hampered by injuries and rotation of Chelsea’s front line. When the Premier League was suspended in March, Pulisic had played in 16 of Chelsea’s 29 Premier League games, scoring five goals and recording two assists – though he had spent the first three months of 2020 out injured.

But the break gave Pulisic time to recover from his injury and get back to fitness, ready for the Premier League’s return in June. And what a return he has had. The 21-year-old has arguably been Chelsea’s best player of June and July, and was becoming a guaranteed starter in Lampard’s XI. Once again, though, injury threatened to curtail his momentum and he was left out of the FA Cup semi-final win over Manchester United before starting the defeat to Liverpool on the bench.

But with Chelsea trailing 4-1, Pulisic was brought on and gave the Blues hope with an assist and a goal. The assist was brilliant, with Pulisic floating through the Liverpool defenders as if they were ghosts before setting Tammy Abraham up for a simple tap-in. He followed that up with an excellent goal of his own, controlling the ball and showing composure under pressure inside the box before rifling past Allison. It took Pulisic’s direct goal contribution post-break to six, four goals and two assists, with only Willian able to match him.

Given the importance of Sunday’s game, there’s every chance of Lampard relying on Pulisic to get Chelsea over the line.

If you’re over 18, Gamble Aware, and don’t have an account with 888sport already, you can get access to the special offer below by following clicking the odds to find out more.