CHELSEA take on Barnsley in the third round of the Carabao Cup as they look for a big improvement on the weekend’s disappointing defeat against Liverpool.

Frank Lampard’s team will seek to recover as he aims to win his first piece of silverware at Stamford Bridge.

As for Barnsley, two defeats from two in the league contrasts with some confident cup form as they swotted aside Nottingham Forest and Middlesbrough in the first two rounds.

What time does Chelsea vs Barnsley kick off?

What TV channel is Chelsea vs Barnsley on and can I live stream it?

The match is being streamed live in the UK on the carabaocup.live website. The match pass costs £10.

Features this week include analysis of Fikayo Tomori, the first look at the teamsheets at 6.45pm sharp, live warm-up action and discussions from regulars on the show, Joe Flemons, Jason Cundy and Dan Stewart and Ben Andrews

The game kicks off at Stamford Bridge in London on 23 September at 7:45pm.

How can I watch it?

The game will be streamed live on carabaocup.live for those who purchase a match pass.

Chelsea have Thiago Silva in the squad along with Ben Chilwell, but Hakim Ziyech will still have to wait for his debut. Christensen is suspended and Christian Pulisic is injured.

Barnsley saw two players red-carded at the weekend so both Mads Anderson and Michal Helik are suspended for this encounter.

Changes in the Carabao Cup

The 61st League Cup campaign will also see a few changes this season. Most importantly there is no extra time; matches tied at the final whistle will conclude with penalty kicks in the old A-B-A-B format.

Rounds Four of this competition is next week, the quarter-finals are fixed for just after the European competition group stages in the run-up to Christmas, and the semi-finals, reduced from the usual two legs to a one-off, are set for early January. The final is to be staged at Wembley on Sunday 28 February. 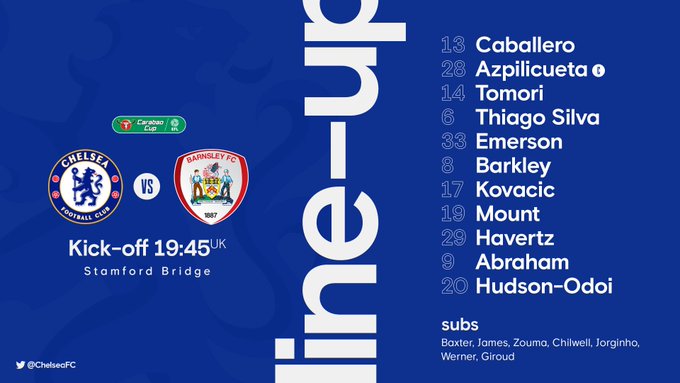 Frank Lampard has confirmed Callum Hudson-Odoi will feature against Barnsley and has called on the winger to take his opportunity and flourish.

While nothing can be taken for granted, a Carabao Cup tie against lower league opponents is usually the perfect stage youngsters to shine. Last season at the same stage a sold-out Stamford Bridge savoured the 7-1 thrashing of League Two Grimsby by a youthful team showing 11 changes to the starting line-up.

Reece James set up two goals and scored one, while fellow debutants Marc Guehi and Billy Gilmour, making their first starts, also impressed. Tino Anjorin and Ian Maatsen made their bow as the game progressed.

This year, the shorter pre-season and limitations of the ‘bubble’ have prompted Frank Lampard to use Barnsley’s visit to focus on honing the sharpness of his main squad. The Blues’ head coach has already confirmed goalkeeper Willy Caballero will be among his team changes tonight, and Fikayo Tomori will hope to retain his position after a good performance off the bench on Sunday. Andreas Christensen is suspended following his sending-of

Chelsea and Barnsley have never before been drawn together in the League Cup. There has only ever been one previous cup meeting at the Bridge: the Full Members Cup in November 1987, a 2-1 win for the hosts.

The Reds have enjoyed a clean sweep in our two FA Cup encounters, both at Oakwell. In January 1989 a Bobby Campbell team with eyes on the bigger prize of promotion back to Division One were thrashed 0-4. More infamously Avram Grant’s strong side were outcompeted and beaten 0-1 in March 2008.

Tonight’s referee is Darren Bond, who usually officiates Championship matches. He is no stranger to Stamford Bridge, though with a flag not a whistle – he ran the line during several of the Blues’ matches in 2011/12.

Like last season, the EFL has elected to use the Video Assistant Referee system only in the semi-finals and final.

Even with rotation and an unfamiliar lineup, Chelsea’s squad depth should be far too strong for a side who look like struggling in the Championship again. Chelsea 2-0 Barnsley