It’s set to be a busy day at Tottenham with Gareth Bale and Sergio Reguilon unveiled as Spurs players.

The Real Madrid duo underwent part of their medicals in the Spanish capital on Thursday before flying to London on the same private jet on yesterday.

Left-back Reguilon has join Spurs on a permanent deal for around £25million, while Bale will sign a season-long loan deal as he returns to the club he left seven years ago. 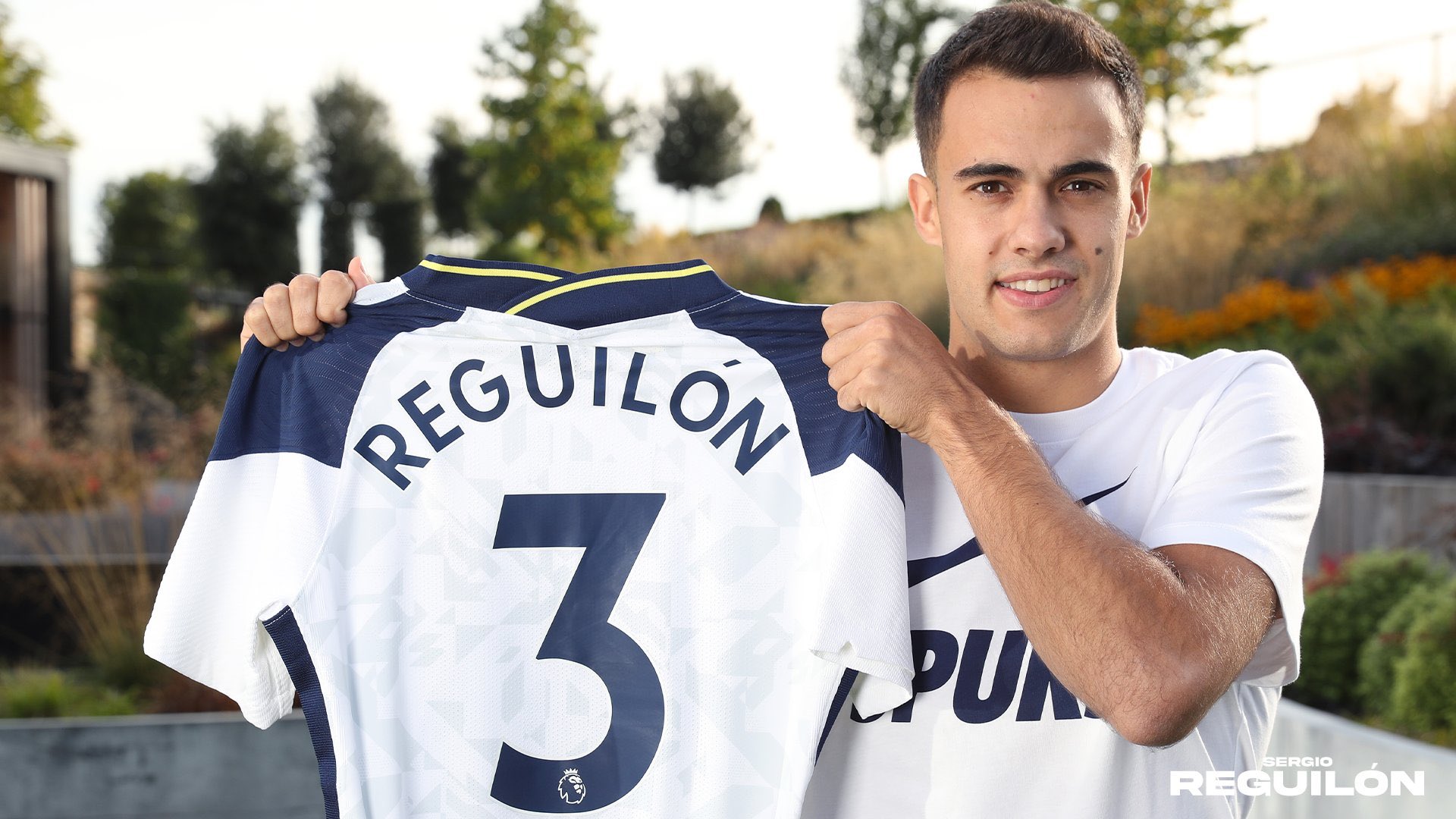 Zidane: Bale still a Madrid player… for the moment

Gareth Bale is still a Real Madrid player “for the moment”, Zinedine Zidane has revealed ahead of his proposed move to Spurs.

Though there has been no official confirmation yet, Bale is expected to complete a one-year loan move to Spurs.

“I haven’t spoken with Bale,” Zidane revealed in a press conference ahead of their La Liga opener against Real Sociedad.

“I know what he has done in this team. He has been spectacular for this team, nobody can say otherwise. There are negotiations. If he moves, we only wish him well.

“I’ve not had any problems with Gareth. The situation is not firm, it’s not done, I cannot say more.”

Asked what Madrid will lose in Bale’s absence, Zidane added: “It’s not about that, it’s life, everyone can have an opinion.

“Gareth is our player for the moment and the issue is still to be closed.”

Though not yet officially announced, the full-back is expected to be announced as a Spurs player in the coming hours, signing a five-year deal.

Speaking in a press conference, Zidane said: “We must congratulate Reguilon on the season he had.

“We have two players per position and I already have two full-backs. I wish him all the best because he had a good season in Seville and he deserves to be at Tottenham.”

Spurs legend Glen Hoddle believes the signing of Gareth Bale will give his former a club a chance to win trophies in what he calls a “make-or-break season”.

“This is a make-or-break season for Tottenham because they need to start winning trophies. The signing of Bale has to give them a chance to do that,” stated Hoddle at a BT Sport event.

“They need to get back into the top four positions and qualify for the Champions League again. But the time has now come to actually start winning trophies because that has been lacking for far too long now.

“They got so close with Mauricio Pochettino on a few occasions, but they came up short when it mattered most. Now Jose has been charged with the task fo changing that tag of being a club of nearly men.

“Players want to win something. You want to go back to your stadium when your carrot is finished and see pictures on the wall of you lifting a trophy.”

Tottenham legend Glenn Hoddle believes the club are facing a ‘make or break season’ after they pulled off one of the transfer coups of the summer to bring Gareth Bale back to the club. 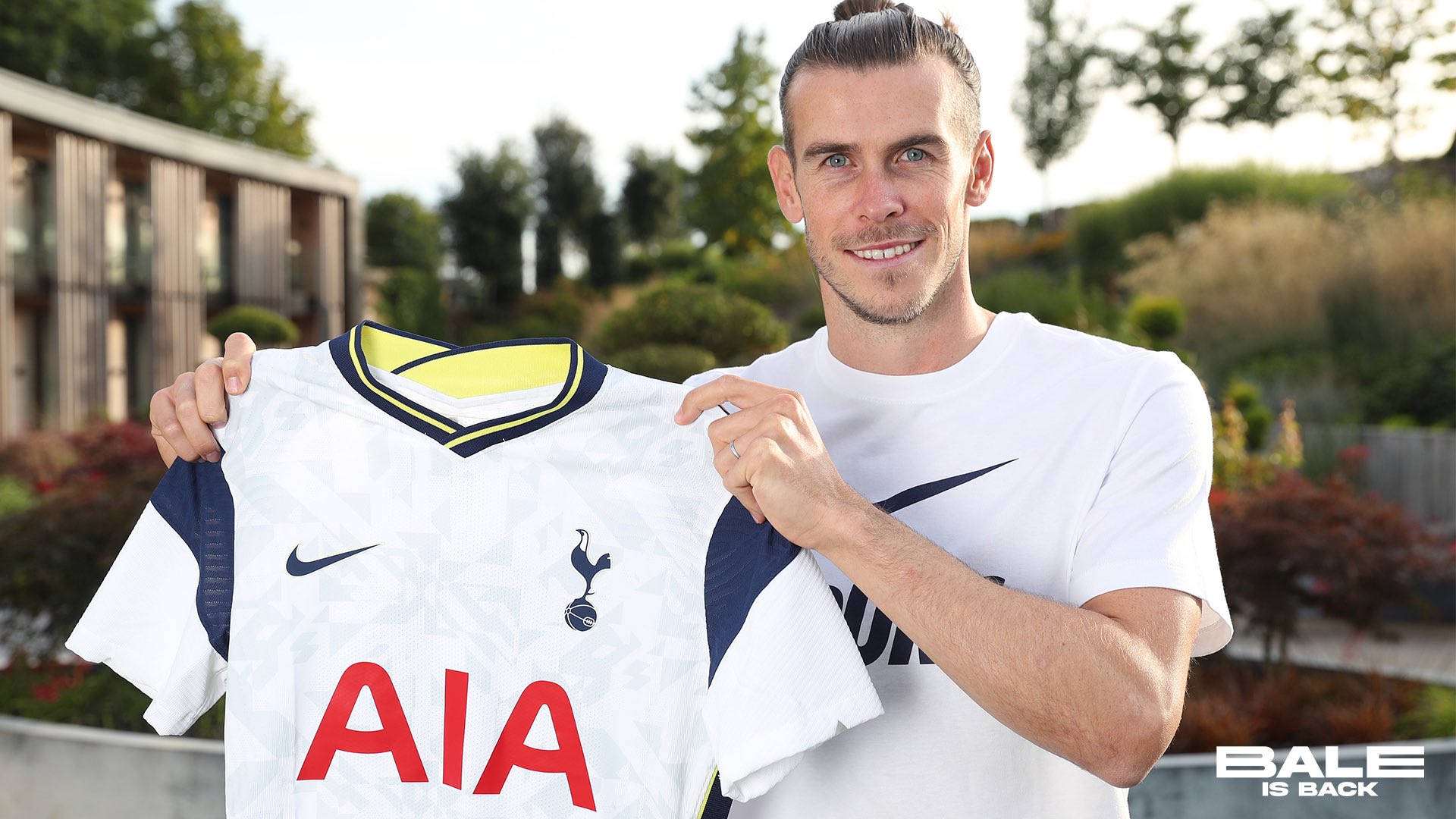 Bale’s loan to cost as little at £9m?

We are still awaiting the official confirmation of Gareth Bale’s loan move to Spurs, as the deal’s details continue to emerge.

According to the Telegraph, the Spurs will have to pay just £9million for the Welshman.

Spurs the ‘only club’ for Bale

Sky Sports’ Kaveh Solhekol has claimed there were numerous clubs interested in Gareth Bale, but his heart was set on Spurs when he heard of their interest.

“According to Bale’s representatives, there were other clubs who were interested in signing him but his heart was set on returning to Spurs,” he told The Transfer Show.

“Once he was told that Spurs wanted him, that was the only club that he wanted to go to.”

What shirt numbers are available to Bale and Reguilon?

When Bale left Spurs in 2013, he had been through three squad numbers in north London.

Bale has kept hold of the No.11 shirt at the Bernabeu ever since, which makes sense in commercial terms: both his Twitter and Instagram handles are ‘@GarethBale11’, and he has trademarked his ‘Eleven of Hearts’ goal celebration.

How Spurs could line up with Bale, Reguilon

Bale surely take the place of Mourinho-favourite Lucas Moura alongside Harry Kane and Heung-min Son in an attacking three, rotating between the flanks with the South Korean.

In an ideal world, Mourinho could then field a mercurial midfield trio of Pierre-Emile Hojbjerg, Giovani Lo Celso and Tanguy Ndombele, provided of course the latter can get fit and fulfil his potential.

Reguilon’s signing could also signal a shift to a more symmetrical back four, with Mourinho have previously used Ben Davies as an auxiliary centre-half, allowing right-backs Matt Doherty or Serge Aurier to fly forward.

The 23-year-old Spaniard is quick and direct, so Mourinho may opt to release both full-backs and instruct Hojbjerg to drop between the centre-backs in possession.

Spurs have option for second year of loan

Here’s the latest from Dan Kilpatrick: “Bale has agreed a season-long loan, thought to include the option of a second year which would take him to the end of his Real contract and leave him as a free agent in summer 2022.

“The deal will cost Spurs under £15million in wages and fees for this season, with Real continuing to pay at least half of his £600,000-a-week salary.”

Jose Mourinho’s overhaul of his Tottenham squad will not stop with the signings of Gareth Bale and Sergio Reguilon, with the Portuguese now set to target a striker and a centre-half as well as offloading unwanted players.

Mourinho will next turn his attentions to signing a new striker, having failed in an approach for Southampton’s Danny Ings, who Spurs must contain on Sunday.

Saints insisted Ings is not for sale at any price, although Spurs are continuing to monitor the situation over his contract, which has two years to left to run.

Spurs are also in the market for a centre-half, with Benfica’s Ruben Dias among Mourinho’s preferred options. The Portuguese club flatly refused to sell the 23-year-old, who is represented by Mourinho’s longtime associate Jorge Mendes, in January but the financial impact of the shutdown and their failure to qualify for the Champions League may force a rethink.

Levy ‘has put his money where his mouth is’

Gareth Bale’s agent has praised Tottenham chairman Daniel Levy as the Welsh winger closes in on a return to the club.

“When Tottenham came calling it was where he wanted to be,” Barnett told the Telegraph.

“It is good for Gareth and obviously I hope it’s good for Tottenham. My main concern is Gareth and hopefully he will get some happiness back in his life.”

He added: “He [Levy] has stuck his neck out. He’s done bloody well. You have got to give him credit and admire his guts. He has put his money where his mouth is.

Mauricio Pochettino has been speaking about Gareth Bale’s imminent move to his former club.

He told COPE: “Bale is a magnificent footballer at an age that still has strength as well as experience and maturity.

“He has been decisive in Madrid, he has won four European Cups, he has scored in important games… he has always been very affectionate with me.”

Pochettino also said such a deal would never have been possible during his time at the club.

“There was never the possibility. Everything was focused on the construction of the stadium, but it would have been a great contribution for the team.”

Bale was pictured arriving at Tottenham’s training ground on Friday afternoon after flying into London to seal a season-long loan return to the club he left in 2013.

But Spurs fans were still waiting for confirmation of the signing as the saga rolled into Saturday. Stay tuned. 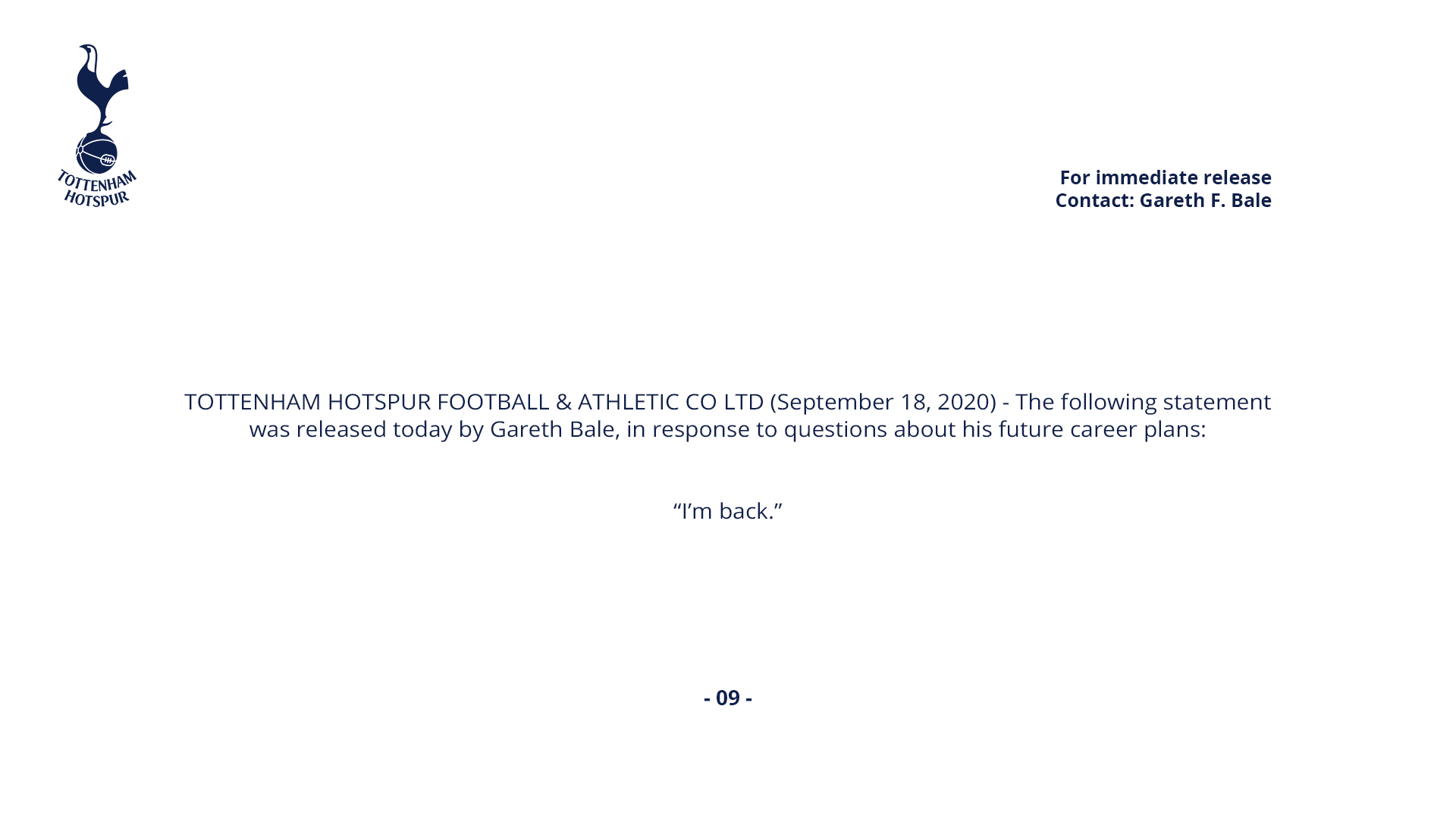 Tottenham needed two goals in the final 10 minutes to beat Lokomotiv Plovdiv 2-1 in the second qualifying round.

Spurs named a strong team in Bulgaria but were facing an embarrassing loss when Georgi Mindev put the hosts ahead in the 71st minute.

But Jose Mourinho’s men saved face with an impressive comeback as a Harry Kane penalty, after an incident which saw two Plovdiv players sent off, and Tanguy Ndombele’s 85th-minute winner sent them through.

"Tottenham has world class players and a world class manager. I can't wait to start working with him."

Bale could in theory take back the No.3 jersey – which was recently taken off of Danny Rose – or the No.16 he originally wore for Spurs, while the vacant No.9 shirt would suggest a more out-and-out forward role. 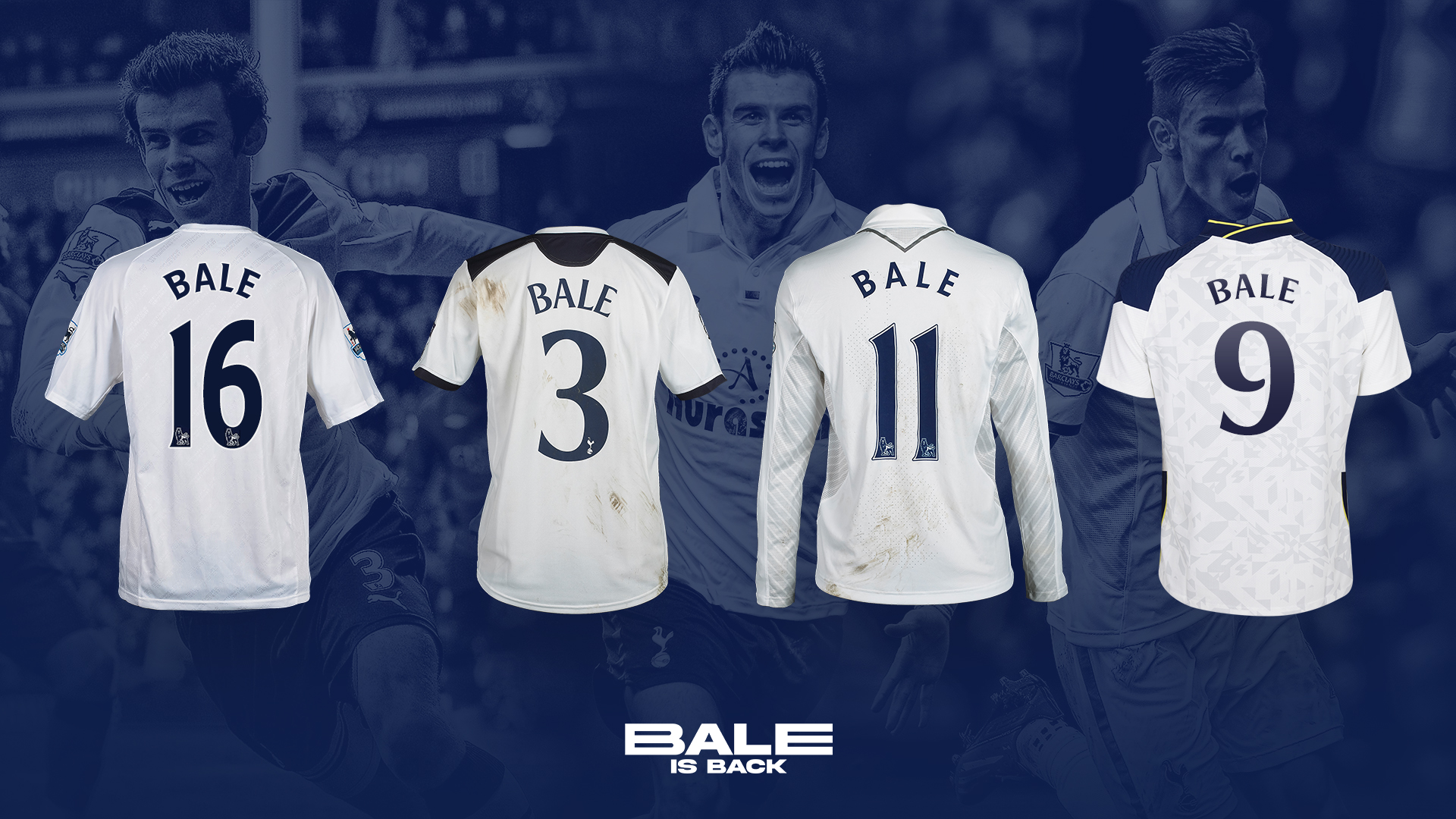 But given the value of the No.11 jersey to Bale’s branding, it wouldn’t be a surprise to see the current occupant at Spurs, Erik Lamela, shifted to another option to make way for the new arrival.

That would also allow Reguilon to come in and take the No.3 jersey as the first-choice left-back, though Ben Davies (No.33) could have something to say about that.