The 24-year-old, who is reportedly set to pocket £170,000-a-week at Stamford Bridge after the club met his release clause, has been in scintillating form this season, scoring 35 goals in all competitions.

He will certainly be a welcome addition as Frank Lampard prepares to make a title push next season.

And after the German striker was in attendance for the club’s win over Wolves at the weekend, Werner has now taken part in his first training session and he looks sharp.

While his new teammates had the day off, Werner trained on his own, building up his fitness as well as participating in dribbling drills and finishing practice. 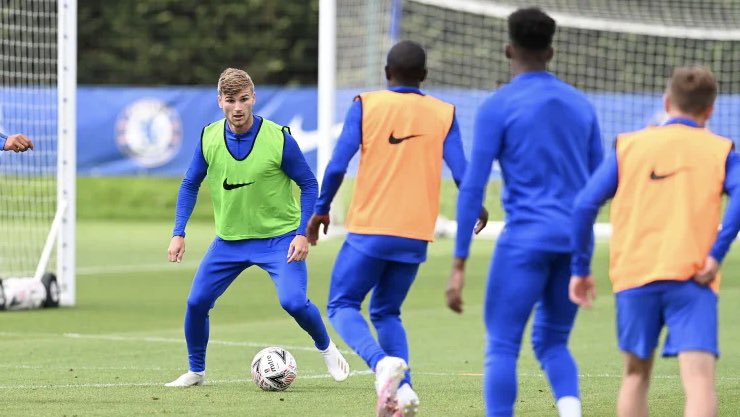 Chelsea are certainly making a big impression in the transfer window.

Werner was heavily linked with a move to Premier League leaders Liverpool for a number of months but Lampard’s men managed to get a deal over the line.

The impressive addition of Dutch winger Hakim Ziyech from Ajax in a £33 million deal is another great piece of business, while it appears Kai Havertz is another man destined for Stamford Bridge.

Chelsea Timo Werner also trained with the rest of the squad at Cobham for the first time today. pic.twitter.com/4qfEBJjY52

Timo werner first interview at Chelsea : “I want to be part of a new era”

Timo werner first interview at Chelsea : “I want to be part of a new era” 🔵 pic.twitter.com/OQzmtNWj9r

Timo Werner has watched his first game at Stamford Bridge as a Chelsea player and he has given his first interview too.

The German international striker, one of our two summer signings so far along with Hakim Ziyech, witnessed his new club ensure he will be playing in the Champions League next season, courtesy of our 2-0 win over Wolves, and it was from his vantage point in the East Stand that he also faced our cameras to speak about his move and what he hopes to bring to our forward line.

The full interview with the 24-year-old, who joins us from RB Leipzig, can be watched now in the video above.

Among his answers, Werner explains how important Frank Lampard was in his decision to move to England.

‘He [Lampard] was the main point,’ he explains. ‘We talked a lot about things like system, like how he wants to play and sees me playing, and how the system fits to me. He is a really nice guy who not only told me what he wants from me as a player because he wants to help me as a guy. He knows me now a little bit better and it fits very good between us and now I am happy to be here.

‘When you have a decision to go from your old club and you come to a big club like this, it was for me a dream which came true because Chelsea is a very big club,’ Werner says about the move in general.

‘I know of the players before when they won the Champions League with Drogba, with my new manager Frank Lampard, Petr Cech as the technical advisor, it is like a little dream for me but I want to become, not a same player like them, but I want to be part of a new era here so I will play to try to give my best.’

The new arrival, although he cannot join the squad this season, has begun training at Cobham and is looking forward to meeting his new team-mates this week.

‘The first day is always a little bit crazy because you don’t know everybody so much,’ he says, ‘and not only the team, it is always a pleasure to meet the team behind the team the first time and now I am very happy and excited to meet them.’

And he’s wasted no time getting down to work, joining his new team-mates at Cobham as they prepare for Saturday’s FA Cup final.

While Werner, 24, is ineligible to feature in the Wembley showpiece, he has taken the useful opportunity to settle in with his new team-mates.

The Blues’ social media team got fans excited, captioning a picture of their new £54m striker: “Looks good in Blue doesn’t he! 🔵

And fans on social media lapped it up, with one commenting: “He looks like legend already”.

And a third confidently predicted: “Great💙 He will win the golden boot next season”.

And both will be desperate to hit the ground running next season at Stamford Bridge, having sacrificed featuring in their former sides’ resumed European campaigns next month.

Werner will have to watch on from London as his former Leipzig team-mates take on Atletico Madrid in the Champions League quarter-finals.

While Havertz, if and when he signs, will miss out on Leverkusen’s Europa League run, having helped them defeat Rangers 3-1 at Ibrox in the first leg of the round of 16 tie between the pair prior to lockdown.