Chelsea are back in Premier League action on Sunday after three months off due to the pandemic.

Chelsea have made good use of the enforced break since the victory over Everton, nursing a host of injured players back to full fitness in time for the campaign to resume.

However, Chelsea boss Frank Lampard has confirmed the team news ahead of his side’s Premier League fixture against Aston Villa at the weekend.

Lampard confirmed today in his pre-match press conference that he will be without defender Fikayo Tomori against Dean Smith’s side, while also revealing Callum Hudson-Odoi is not match fit ahead of the restart.

Jorginho is the only player who will definitely miss out at Villa Park, with the Italian set to serve the final match of a two-game ban.

Mateo Kovacic, N’Golo Kante, Christian Pulisic and Callum Hudson-Odoi are all fit once more while Tammy Abraham has also recovered from a persistent ankle injury.

So this marks the question, what kind of line up will we see from him on our first game back?

Kepa Arrizabalaga was recalled shortly before the coronavirus lockdown and should start between the posts, with the Spaniard potentially lining up behind the same back four that shut out the Toffees. 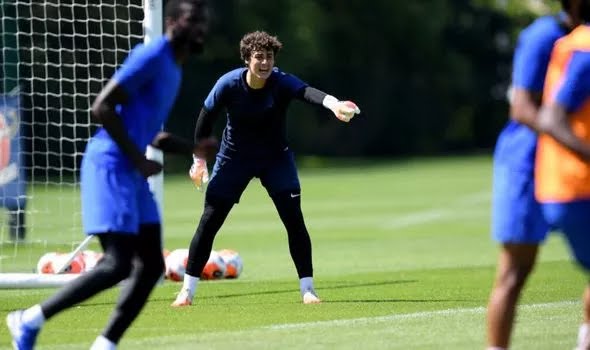 In defense, Lampard reported on the press today that Fikayo Tomori is out for 10 days. Following that, Christensen joined with with Rudiger will form the two central defensive comb. Recee James appears to have cemented his position as first-choice right-back, after some solid performance in recent outings; Azpiliqueta will line up on the opposite side of defence.

In midfield, Ngolo Kante and Mateo Kovasic will be deployed as the two midfleld comb. Joined by Ruben Loftus Cheek who’s now fit to play having scored twice as Chelsea routed QPR 7-1 in a friendly at Stamford Bridge. The midfielder has been out for more than a year after rupturing his Achilles during a friendly at New England Revolution at the end of last season.

Tennage sensation Billy Gilmour may drop to the bench having burst onto the scene in Chelsea’s last two games before the season was halted – earning rave reviews for his man-of-the-match performance in a 2-0 FA Cup win over Liverpool, before making his Premier League debut in a 4-0 thrashing of Everton.

In attack, Pulisic is likely to start on the left wing having returned from Injury, Mason Mount seemingly cemented his place in Lampard’s Xi, However, if Ruben Loftus Cheek is restored to the starting lineup, the England international may have to move into the front three where he can cause damage cutting inside off the flank as he did earlier in the season.

Abraham should come in for Olivier Giroud up top..

How good is this?