The first was that one Shalom T. Shoremi requested for a Special Marriage License to consummate same sex marriage.

The second oddity was that the Shoremi family of Ogun State disowned its daughter through a paid advertisement in the newspaper.

This came to the fore when the family placed “A Public Notice” in the newspaper on the development.

The notice signed by the Shoremi family said that its attention was drawn to an application by its daughter seeking approval of the Federal Marriage Registry for same sex marriage.

The family hinted that the application for the special marriage license seeking for same sex marriage was rejected because it was not in consonance with the Marriage Act of Nigeria.

While disassociating itself from the attempt to legalise the same sex marriage, the family announced that it has severed ties with her.

The Shoremi family also disown Shalom for planning to violates the law of the Federal Republic of Nigeria.

The family also disqualified her from being entitled to inheritance from the family.

Find the advertisement below:

The attention of the Shoremi Family of Ogun State has been drawn to an application for a Special Marriage License sought by Shalom T. Shoremi.

She had requested for a special marriage license at the Federal Marriage Registry on the 22nd of March, 2018 to allow her consummate a same sex marriage, which was rejected as it is in variance with the Marriage Act of the Federal Republic of Nigeria.

The family is disassociating itself from this move and has severed ties with her.

We also disown her on the grounds that what she planned to do is against the law of Nigeria.

She will also not be entitled to anything from the family inheritance.

The public should please take note. 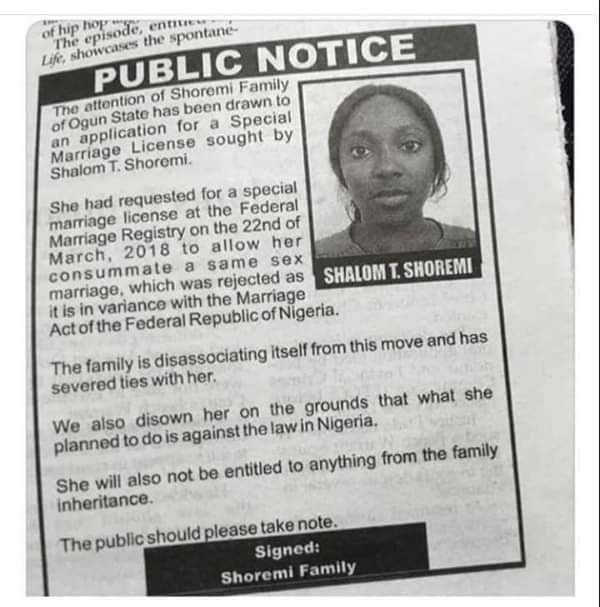 What is your take on this?

Let us have your comment in the box below.