The result lifts the Blues back up to fourth in the table, after they were temporarily leapfrogged by Manchester United.

Nigel Pearson’s side remain a point above the relegation zone but have played a game more than Aston Villa, who travel to Liverpool on Sunday

Olivier Giroud opened the scoring for the Blues, latching on to Ross Barkley’s clever pass and steering a left-foot shot into the bottom right corner. 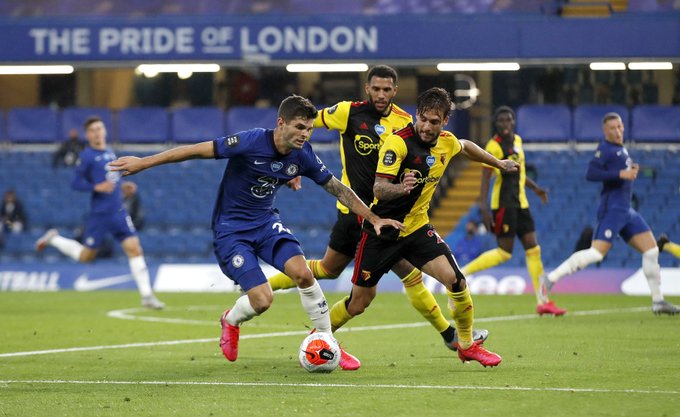 While Watford worked hard to contain the hosts they offered little to suggest they were capable of a first win at Stamford Bridge since 1986.

And they fell further behind before the break, with Etienne Capoue’s rash challenge on Christian Pulisic resulting in a Chelsea penalty that Willian duly converted.

Thereafter it was relatively plain sailing for Frank Lampard’s side, who rounded off the scoring when Barkley found the top left corner from Cesar Azpilicueta’s cross.

The Blues have now won three of their four games since the top flight resumed in June.