According to dailyfocusng Ronaldo who came third in the 2019 Ballon d’Or rankings behind Virgil van Dijk and winner Lionel Messi, has now won the award six times out of its nine years of existence. 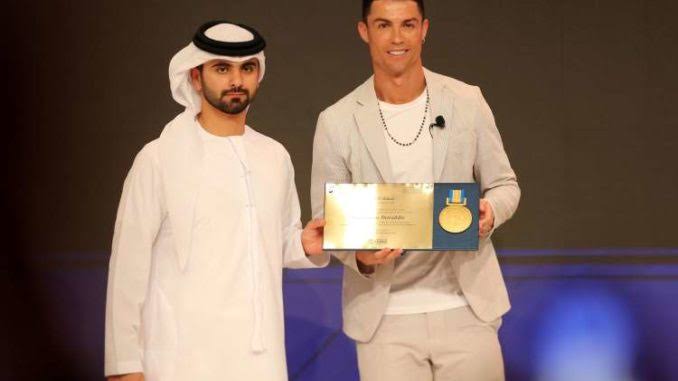 But the 34-year-old, widely regarded as one of the best footballers of his generation, got his fourth successive prize at the awards after helping his club Juventus claim the 2018-19 Serie A title in his first season in Italy while also playing a key role in Portugal winning the Nations League.

“Honoured to receive one more time Globe Soccer Award! A very emotional moment for me to share this award with my family. Grateful for all the hospitality, see you soon Dubai!” he tweeted

It also marked a fourth successive triumph at the awards for the 34-year-old, who helped Juventus claim the 2018-19 Serie A title in his first season in Italy while also playing a key role in Portugal winning the Nations League.

“I have to thank my family, my girlfriend, my boy there, Cristiano, my three kids who are waiting for me in the hotel, my friends, my team-mates of Juventus and the national team, my agent, all the people here tonight who support this gala,” Ronaldo said.

“I have to say thank you to the Arabic community, which is always great with me. I have to thank Dubai as well – it’s a marvellous place to be, I’m coming every year and I love this place.

“And finally to thank [everyone] who voted for me. It’s a great honour to be here and receive this amazing award. I hope to be here next year to receive this award, of course. Thanks to everyone, and a happy New Year.”

Ronaldo was not the only big-name winner at the event, with Atletico Madrid youngster Joao Felix named as the “best revelation player” while Miralem Pjanic was given the “player career” award.

England international Lucy Bronze was crowned best women’s player of the year, while Liverpool boss Jurgen Klopp was named as the best manager.

“I am sharing this award equally with my staff, I would not achieve this one without them and of course without the performance of the team,” Klopp said.

“We started the development from two and a half years ago, we had to solve the problems we had in the beginning, changing the players was the main factor for success, and it is obvious, their quality and mentality are the reason for what we achieved.

Liverpool are currently top of the Premier League heading into the new year, 13 points clear of second-place Leicester City after the Reds beat Wolverhampton 1-0 on Sunday.