Kai Havertz to Chelsea should be finalised within the next 2 weeks. Both parties are coming closer to finalising a fee. Personal terms have never been a problem. Havertz is ‘still eager’ to join the London club following Leverkusens’ exit from the UEL.

Bayer Leverkusen will take on Antonio Conte’s Inter Milan in the quarter match up in the Europa League, and as things stand, a defeat to the Italians will surely make the Kai Havertz deal official.

Havertz is expected to join Chelsea for a whopping £90 million on a 5 year contract. Chelsea FC has agreed to pay the sum in install

ments and bonuses. While it has taken some time to call the deal official but the end of Leverkusen in the Europa League will surely be enough. 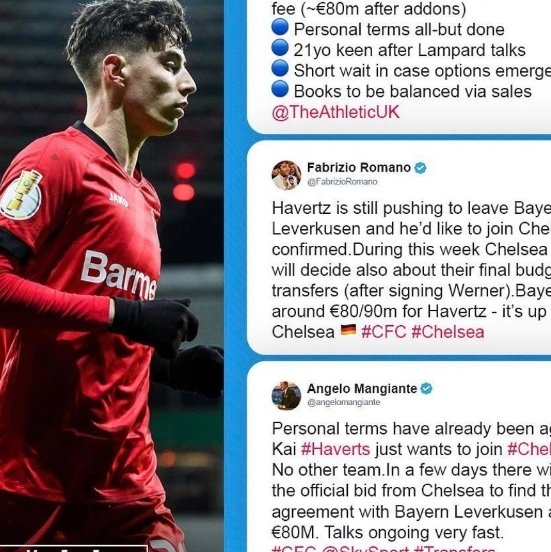 Chelsea have been linked to a number of new players over the last few months, and some names have really gathered some pace.

Kai Havertz from Bayer Leverkusen looks a dead cert, and Ben Chilwell from Leicester City, and Declan Rice from West Ham also seem to be generating real legs to the stories.

Matt Law of The Telegraph has provided an update on the latest regarding The Blues transfer plans this summer, and he believes that after they have signed Havertz, they will focus on selling players before they can move on to the likes of Chilwell and Rice.

Law reports that Chilwell and Rice will cost in excess of £50 million each, so Chelsea will need to raise some more funds and create space in the squad before signing them.

There is no rush though, with the transfer window being extended until the end of October due to the pandemic.

Chelsea’s execs are set to be very busy