The Blues lifted the first silverware of the 2020/21 campaign, as a 30-yard screamer by Millie Bright and Erin Cuthbert’s smart finish saw off Manchester City in an entertaining Community Shield.

This was the first-time since 2008 that the domestic season started with the traditional curtain-raiser between the league champions and FA Cup holders, although with last season’s FA Cup still to be finished, 2019 winners City stepped up to face us at Wembley Stadium. 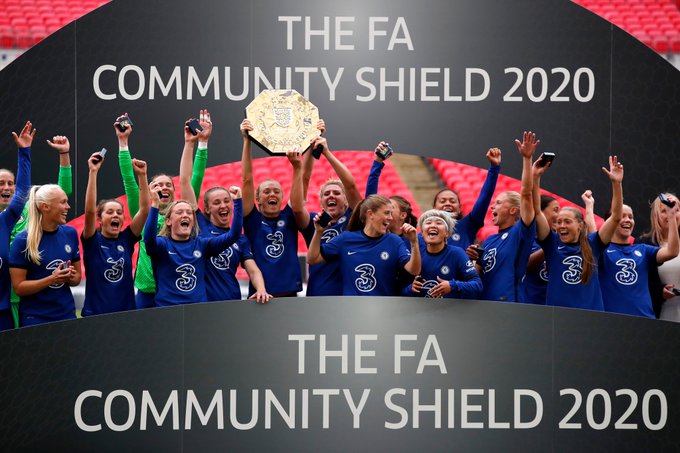 They certainly played their part in what was largely an even contest, although one which largely remained goalless after a series of missed chances. Sam Kerr had several opportunities, most of them in a first half in which Manchester City also hit the post as it somehow remained 0-0 at the break.

Both sides continued to spurn chances early in the second half, but the dismissal of Jill Scott for a second bookable offence allowed us to take control of the game and the decisive moment came just a few minutes after the England international’s red card.

Bright was the scorer, striding forward from defence to take a pass from Ji So-Yun in her stride, before unleashing a ferocious strike from distance that flew into the top corner. The centre-half and her team-mates jubilantly celebrated another Wembley wondergoal, following the three spectacular efforts on our last appearance at the ground for the 2018 FA Cup final.

Substitute Cuthbert put the seal on the win with a fine finish in stoppage time after the ball fell invitingly for her and it was now clear the Blues would be lifting our eighth silverware of Emma Hayes’s eight-year reign.

Three of them have come this year alone and with last season’s FA Cup resuming next month with the quarter-finals, there is still a chance of a fourth trophy in this punctuated 2020. 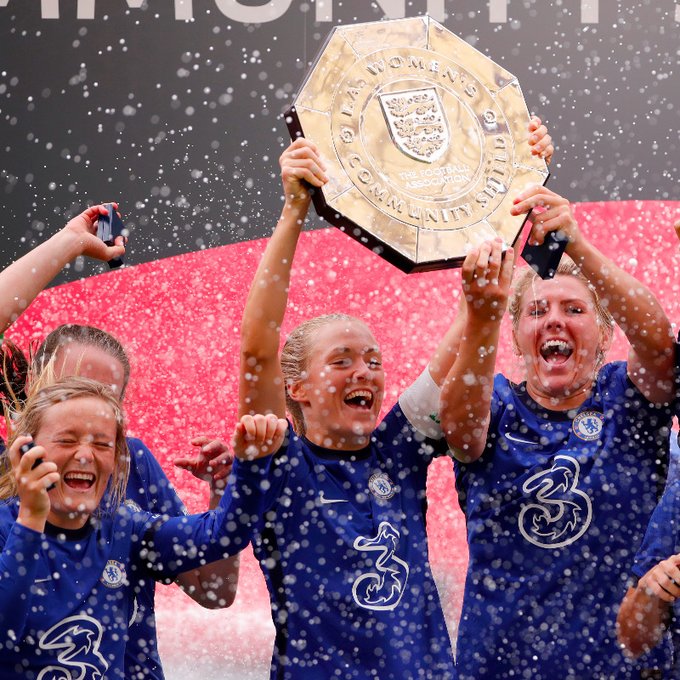 THE PRE-MATCH SCENE AT WEMBLEY

The Women’s Community Shield had not been played since 2008, when Arsenal beat Everton at Moss Rose Stadium in Macclesfield. Now, with its return to the football calendar, the game was, for the first time, held at Wembley Stadium and played just hours before the men’s match between Liverpool and Arsenal.

Six months on from our last competitive match, which was a 2-1 win over Arsenal in the Community Shield, the Chelsea side had a very similar look to it. Melanie Leupolz was the only one of our summer arrivals to be named in the starting line-up, as Jessie Fleming and Niamh Charles had to settle for a spot among the substitutes.

Ann Katrin-Berger started in goal behind the familiar back four of Maren Mjelde, Bright, Magdalena Eriksson and Jonna Anderson. Leupolz was selected on the right side of a midfield three, alongside Sophie Ingle and Ji, while the attacking trident comprised Fran Kirby – making her first Chelsea start since November 2019 – Kerr and Guro Reiten.

As with all top-level football in England, no fans were admitted and so our fourth visit to the national stadium, in stark contrast to the previous three, was played out in front of 90,000 empty seats. An essential measure, in these trying times, but not a scene befitting the first-ever Wembley meeting between the two teams who have shared the majority of major honours in England over the past five years.

Still, that didn’t lessen the intensity we have become accustomed to in these matches and from the first whistle – which was preceded by both sides taking a knee in support of the Black Lives Matter movement – it was clear Chelsea would look to get into City at every opportunity. One such show of aggression almost helped us go in front with less than three minutes on the clock.

Ji, sporting a new look after bleaching her hair in the summer, won back possession on the halfway line and immediately slid Kerr, who cleverly drifted away from her marker, through on goal. With Ellie Roebuck rushing out to close the space, the Australian centre-forward looked to slip the ball past her with the outside of her right boot, but she could only find the side-netting. 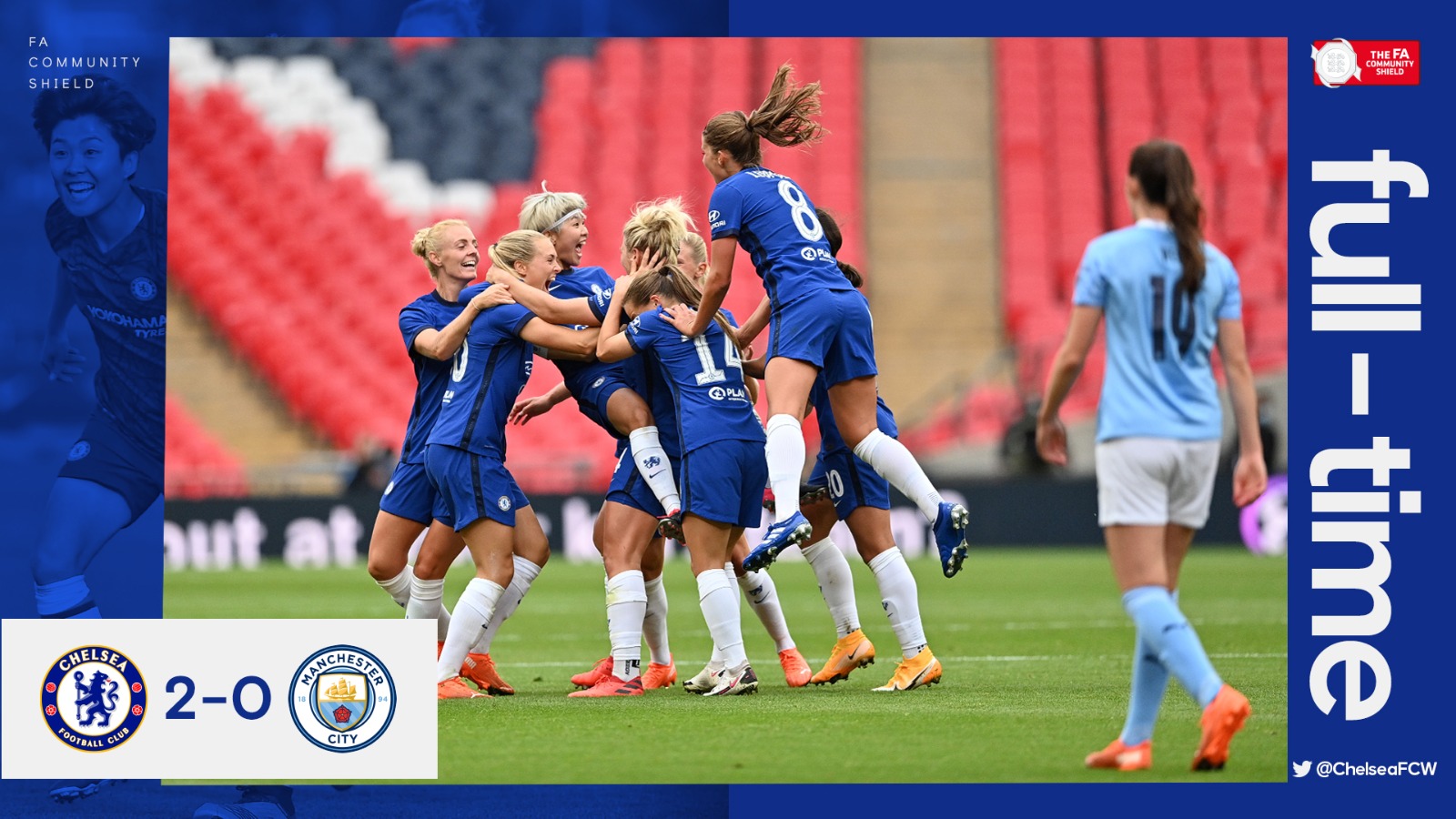 After that near miss, City grew into the game and Georgia Stanway forced a fine save from Berger with a powerfully struck shot from outside the box. That was followed by the departure of Lauren Hemp, whose bright start to the game was curtailed by what looked to be a hamstring injury. Janine Beckie came on in her place.

It was almost a dream introduction for the Canadian. A mazy, slaloming run from Chloe Kelly cut through the Chelsea defence, but instead of shooting she opted to square it to Beckie, who tapped into an empty net. She was, however, deemed to be offside – and replays showed the assistant referee was spot on.

The game had now become stretched and both teams were making mistakes, suggesting the lack of competitive match action was a bigger factor than previously thought. Ji was brought down on the edge of the box by Jill Scott – a participant in the last Community Shield for Everton – resulting in the first booking of the match. The South Korean fired the resulting free-kick against Eriksson, who had peeled away from the wall, and the rebound spooned up into the path of Kerr. Normally so lethal with her head, it was another missed opportunity for our No.20 as she sent her header off target.

Soon it was City’s turn to go close. This time Ji was legally dispossessed, and only 30 yards from her own goal, which allowed Stanway to fire a shot that Berger palmed away. The ball fell kindly to Kelly and her first-time shot found the outside of the woodwork, although Berger looked to have it covered at her near post.

JI PULLED THE STRINGS IN THE MIDDLE OF THE PARK 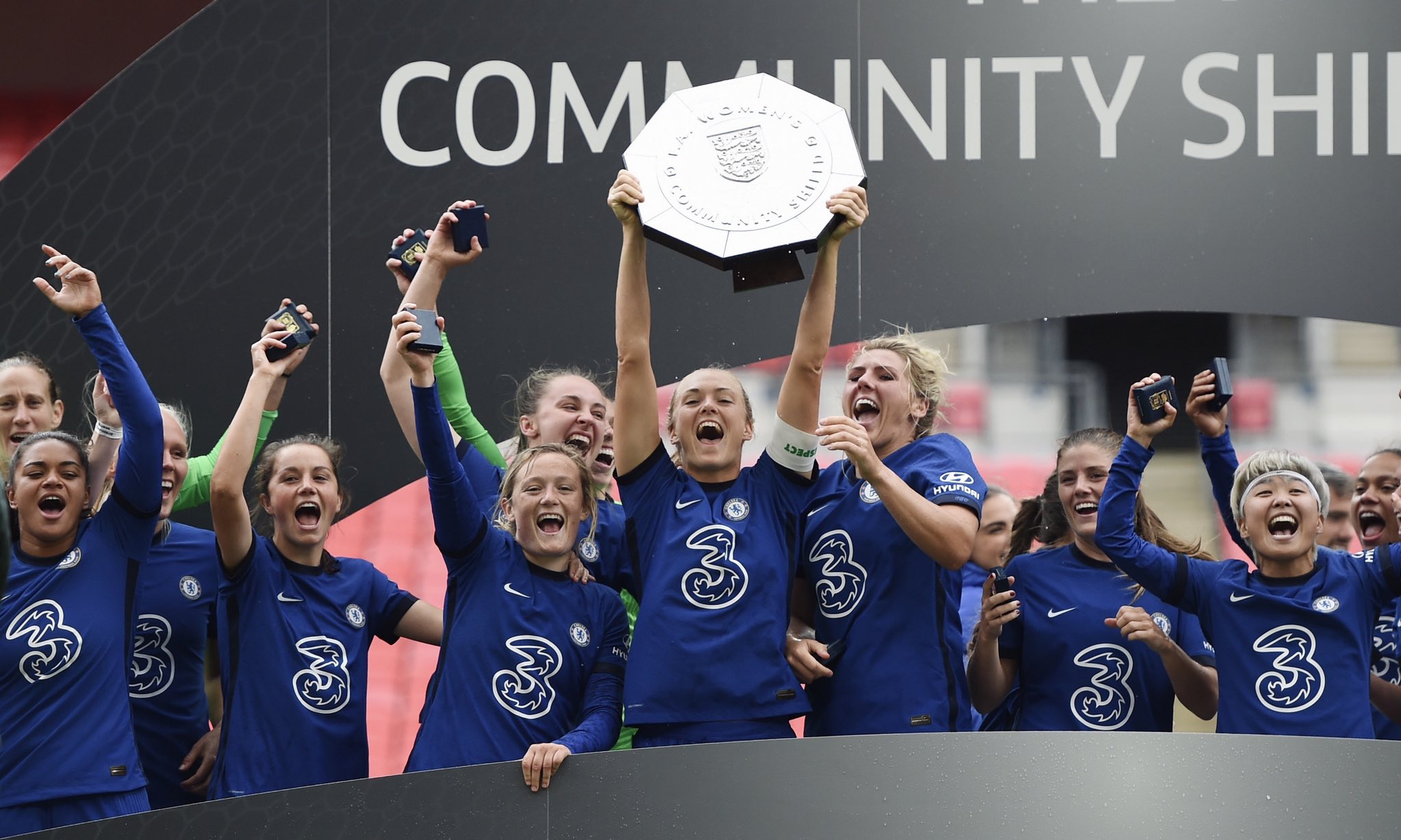 Another shot from Kerr, this time a chance of her own making, missed the target and on the stroke of half-time we should have had a two v one opportunity. Leupolz and Steph Houghton contested a fierce 50-50 in the middle of the pitch, which the German got the better of, and the ball was quickly played up to Ji. With Kerr alongside her in support, our No.10 just had to it in her stride, but a loose first touch allowed City’s defence to recover and the opportunity was gone.

The last time we met City, back in February in what proved to be the WSL title decider, it finished 3-3. The half-time scoreline today could quite easily have matched that, had both sides taken their chances.

Remarkably, the second half began with another clear opportunity going begging. Ingle’s hooked pass round the corner sent Kirby away down the right and her pass across goal was nudged wide by the left boot of Kerr. The Australian, whose goalscoring record throughout her career speaks for itself, could not quite believe it.

The run of missed chances continued in the space of 60 seconds either side of the hour mark, as first Stanway slipped the ball wide at the end of a one-on-one and then Kerr was off target after being played through once again. In the build-up to that Kerr opportunity, Scott had lunged in on Ji and referee Rebecca Welch, having played the advantage, went back and showed the midfielder a second yellow card.

Facing 28 minutes with a numerical disadvantage, City unsurprisingly retreated – and ultimately that proved to be their downfall, as Chelsea took the lead a few minutes later. The ball was played back to Bright, who had advanced into the offensive third, and with no one closing her down, the centre-half took a touch and then let rip from 30 yards out. The swerve and dip on the strike left Roebuck with no chance as the ball flew into the top corner. For all the intricate football that had previously been on display, sometimes you can’t beat a good, old-fashioned piledriver – and those who have seen Millie in action on the training field will know she’s certainly got that in her locker.