Bayer Leverkusen are keen to resolve the future of Kai Havertz by August 28th, with Chelsea continuing to negotiate a deal for the German midfielder.

Leverkusen officials have confirmed that they have staged extensive talks with Chelsea over Havertz in the last two weeks, with the German club stating they want to secure a €100m fee for their 21-year-old star.

Chelsea’s initial offers have fallen short of that valuation, with the Stamford Bridge club looking to piece together a structured deal that would see additional payments made in instalments over the period of Havertz contract. 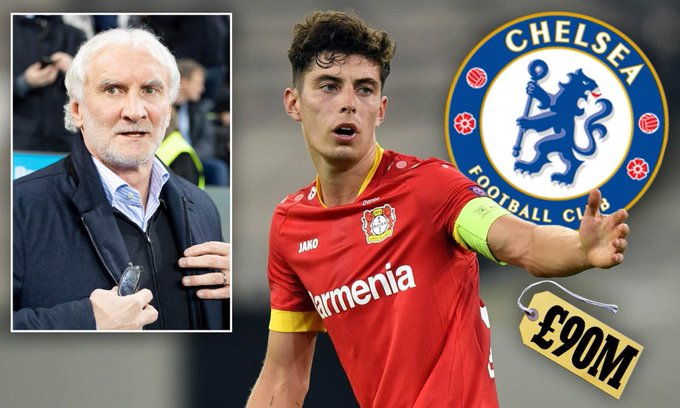 Now Leverkusen managing director Rudi Völler has given an update on the talks, as he insisted his clubs are keen to hold firm on their valuation as they insist the financial impact of the Covid-19 pandemic will not affect their stance.

“There is nothing new in this regard, and we are still very relaxed about it,” Voller told Sport Buzzer. “Of course, we would be very happy if he stayed for another year. It is clear that the departure of such a player, despite the high transfer fee, always means a loss to a team.

“In times of corona, it may actually be that the transfer fees have decreased for many players. But corona or no corona, this is not the case with exceptional players like Havertz or Jadon Sancho. There is no corona discount for them.

“What makes Kai Havertz so interesting is the fact that he embodies world-class in four or five positions.”

August 28th has been mentioned as a cut-off point for negotiations as that is the date Leverkusen players are due to report back for pre-season training and Covid-19 testing, with Havertz reported to be keen to push through a move to Chelsea as soon as possible

Meanwhile, Independent.ie understands that Chelsea are closing in on a deal to sign Leicester full-back Ben Chilwell, in a move that could be worth as much as £50m.

The arrival of Chilwell and Havertz would highlight Chelsea’s eagerness to spend big in this transfer window, with Germany striker Timo Werner and midfielder Hakim Ziyech already signed by the Blues this summer.